Hi there, Binding of Isaac fans! I've got some awesome news: The Binding of Isaac: Afterbirth is just about ready to launch on PlayStation 4, Xbox One, and Wii U (at a later date). In fact, it's going to be out today, May 10th for $10.99.

But enough with the lists. Here are the juicy details on some of Afterbirth's new content straight from the game's madman creative genius, Isaac's proud papa, Edmund McMillen:

Greed Mode is a totally new game mode in afterbirth that is a hell of a lot more fun than even i expected it to be. It mainly involves fighting off waves of randomly chosen sets of enemies that spawn around the room. These waves ramp in difficulty and continue to stack on top of one another till you hit wave 8, press the stop button, or die.
The more waves you string together without hitting the stop button, the higher the cash bonus, and if you are able to do it without taking damage there is another bonus in it for you. After wave 8 you get a breather to cash in your winnings and the button mysteriously changes to a skull!

Pressing said skull will start the “boss waves,” an easy wave (on par with a basic boss from that chapter) and a med wave (usually an easy level boss with a small mob). You get a lot more time to kill these waves, but depending on how fast you are there is a high chance that the second boss will spawn in alongside the first...but you can always sacrifice half a heart to stop the next wave from spawning if things are looking dire.

Once these boss waves are finished, the exit door will unbar and you will be able to progress to the next level...or you can take a chance with the “nightmare boss wave” in order to unlock the devil room door. But get this: every single room in greed mode is 100% new, cursed rooms yield totally new surprises, secret rooms have bigger payoffs, and the content of devil rooms aren’t exactly what you are used to. In fact, all the pools in Greed Mode are totally new and have been heavily modded to fit Greed Mode perfectly.

All in all, Greed Mode will feel like a totally new experience that will not only yield tons of rewards for completing it with each character, but also features a very unique ending that should have you coming back for more for quite a while.

For those of you who have used “seeds” in rebirth, the short answer is Daily Runs are daily seeds that are universal to everyone playing that day...but I'll assume you don't know what seeds are and give you the deets.
Every new day, Afterbirth will generate a new “run” for everyone who owns the game to play. But what makes Daily Run different than seeds is that Daily Runs will be identical for everyone in every way (though we all know your actions might change later outcomes in the future...Back to the Future logic is real!).

So it doesn't matter what you have or haven't unlocked, Daily Runs don't play by the rules! Everyone is on an equal playing field here! (Aside from 1000s of hours of experience and knowledge of the game.) Doesn't matter what you have or haven't unlocked. if you wanna go for Mega Satan from the get-go...then by all means go for it! Beyond all runs being universal, Daily Runs will choose a specific character for you to play as...and EVERYONE is forced to play as him/her/them universally. Yes this includes The Lost...but don't worry, those will be rare days. That said, nothing can be acquired or unlocked in daily runs. Much like seeds, Daily Runs do not yield any progress rewards...so it's best to play the main game more if you want game progress.

Afterbirth will features loads of new enemies and bosses, and even some alts to existing ones...but just how many is loads? Honestly, I'm not sure. At this point it's even hard to remember due to the fact that so many enemies have new alt forms and more than a few have level alt forms as well (like burning fatties/walkers/leapers etc). But here is one of my personal faves, mostly due to how they look. Fat Bats, or Fats as I call them, are a newcomer to the caves and depths.

Little Horn is a new and much welcome “stubby” demon boss. I really loved the design of Loki and I know there are more than a few Loki fans out there who appreciated the four-armed lil devil. I liked how small he was and in Afterbirth I made sure to add in more “small” bosses as well as more “mega huge” ones to boot. Not only does this guy break the mold with his AI, but he also has more attacks than normal bosses. Easily one of the most fun boss fights thus far. I also got to reuse some of his mechanics in other ways...

Afterbirth will feature five new champions! Champions in Isaac are twice as large, do a full heart of damage, have twice the life, and usually drop something special when they die. Well, this time we are sticking with the basic formula...but switching things up just a tad. I wont spoil it all but here are two of the five new champion forms found in Afterbirth: Green Pulsing Champion and Itty Bitty Champion! 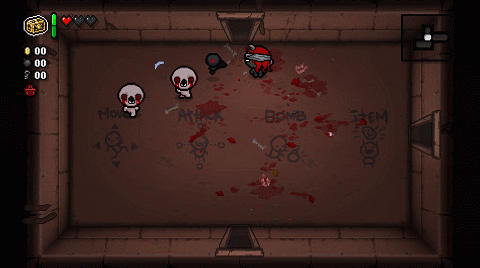 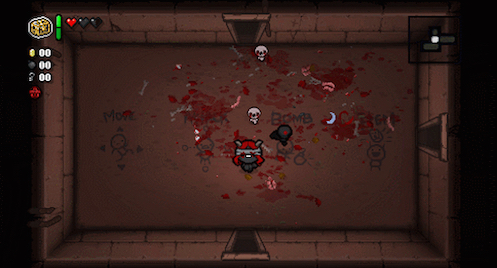 There will be new cards, pills, runes, bombs, hearts, chests, and even a few new item types you will run into and/or unlock via one of the 10 new challenges. I don’t want to spoil all the fun here, but here are a few...

New Item: DIPLOPIA! Diplopia is a new one-use item that does something pretty interesting: it doubles items and pickups. Not all items are ones you want two of, but I'm sure some of you can think of more than a few that would be nuts to have two of... There are also a few tricks you can do with it.

Double your pleasure with the Diloplia.

It's a new fave of mine: THE FRIEND BALL! I felt like charm effects were one of the more interesting additions to Rebirth, so I wanted to use them a bit more in Afterbirth. The Friend Ball will instakill any non-boss enemy, trapping them inside the ball. Then you can release the trapped enemy, now charmed to fight alongside you for the duration of the room! 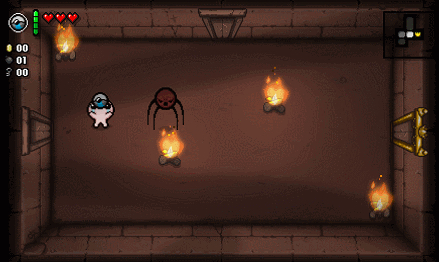 Use the Friend Ball to...catch 'em all?

Dead Eye is a fan-suggested item that raises damage with each consecutive hit and causes your tears to become red glowing balls of death if you play well.

Dead Eye may cause your enemies to be the ones weeping.

One of the more interesting features of Afterbirth's main game is “alt chapters.” As many of you know the game currently features alt chapters for each existing level set, ie, the basement's counterpart is the cellar. Each alt chapter has its own set of levels, themes, and enemies that are semi-exclusive to it. I wanted to add more stuff like this without muddying things up by actually making a full third alt for each existing chapter set. In Afterbirth, each chapter set will feature a variant that will go over the top of whatever theme you are currently playing, so regardless of if you are in the cellar or basement, there is a small percentage chance that whatever level you are in will become a new Afterbirth alt. 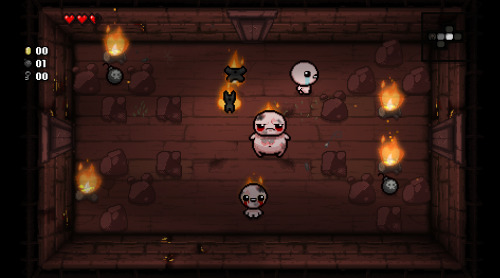 The new, alternative version of the basement/cellar. Burn, baby, burn!

I'm not going to spoil them all, but we will start with the first: the burning basement/cellar. Aside from how different this alt looks, it also features many different changes. There is a high percent chance that many different enemies will become “flaming alts.” All new level alts will feature modded stats and new attacks; there is a small percent chance that rocks will become fire pits. These seem like minor changes, but in a lot of ways these new alt levels will act as “champion” variations of levels, making things slightly harder but also raising the possibility of more reward. Each new alt will also feature new music, visuals and effects.