Before we get started, we are very happy to announce that Full Mojo Rampage will hit PS4 and Xbox One on June 28th! Check out the trailer below!

One of the major elements we wanted to include in Full Mojo Rampage was for it to be a unique experience every time people play. For any given player, we want it to be different from one game session to the next, and we want each player to have a different experience from other players. That's one of the reasons why we wanted to emphasize character customization.

As I discussed in previous posts, a big part of that is choosing your parent Loa. There are eight in all, each with different spells and passive abilities, and you can choose a Loa that emphasizes, for example, aggressive attacking, or defense, or healing, or a more balanced play style. There's only one Loa when you start, but after you've unlocked others, the one you go with is up to you, and the choice of Loa defines in part how you'll play the game. 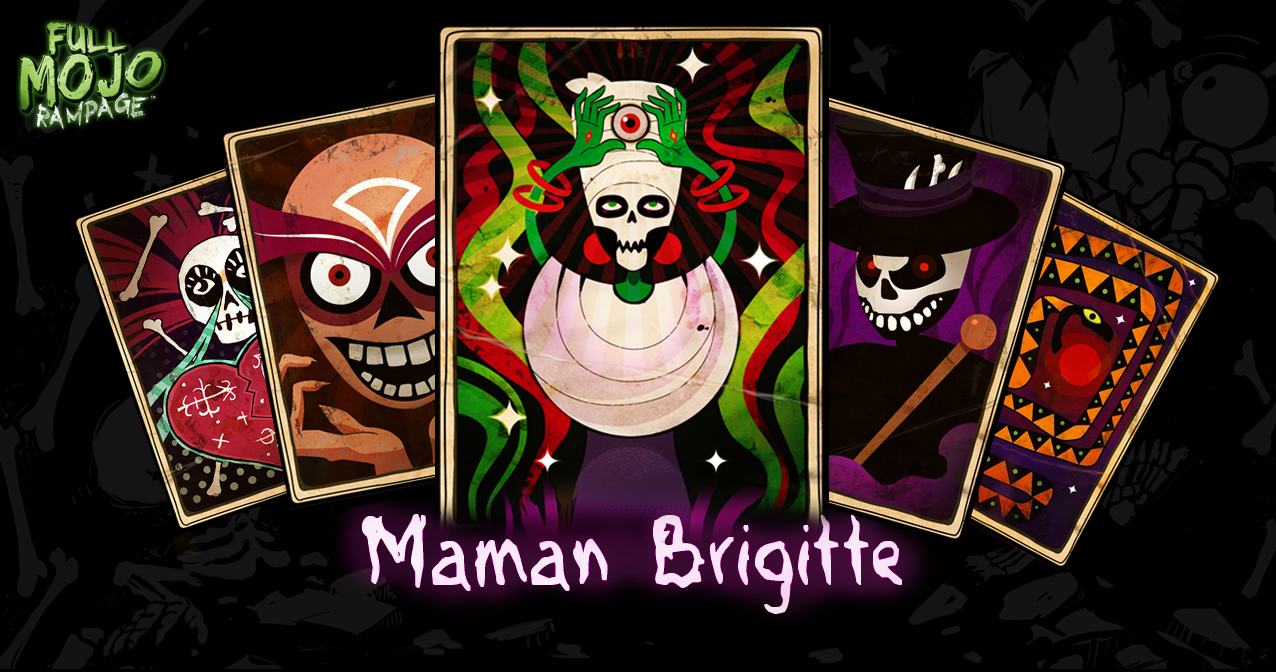 Naturally, your parent Loa plays a big part i customizing your character and determining how you'll play the game.

But that's only one way you're able to personalize your experience. You're also able to collect and equip a variety of pins to enhance your character and build up your strength - things like more health, dealing extra damage, enhanced stats, and some with special properties. You can select pins that make up for deficiencies of your parent Loa to make your character more balanced, or, better yet, you can play to your Loa's innate strengths. By combining a parent Loa that possesses good defense with pins that grant extra health and life regeneration, for instance, you can make a tank character that's very hard to stop. Pins carry over from one game to the next, so once you obtain a new pin, you'll be able to use it as often as you want, although you're limited on how many pins you can equip simultaneously. 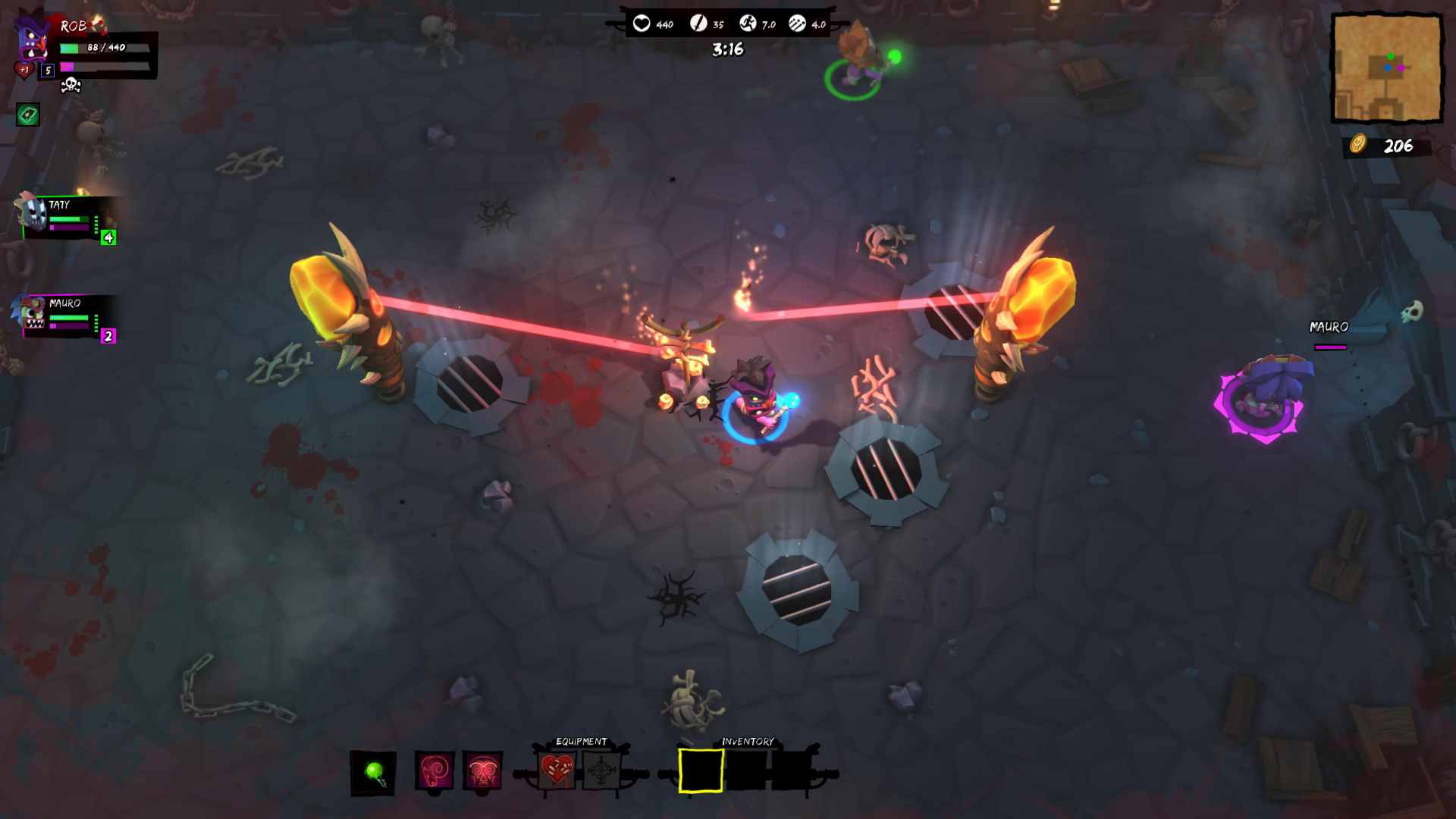 You'll want as many pins as you can get! They all enhance your character in various ways.

In addition to the pins, you'll also get to acquire and use a huge variety of items called mojos. Unlike pins, mojos don't carry over between games, so if you die or start a new quest, your mojos will be gone - use 'em while you've got 'em! There are more than 100 in all, and how and when you use them will definitely affect how you play the game.

Mojos can do a ton of different things; some simple but useful ones are mojos that boost your basic abilities, such as increasing your critical hit strength or your critical hit chance percentage, or add extra inventory space so you can equip more stuff. Other mojos are more complex, such as ones that spawn allies to help you in battle. There's one that creates four or five kamikazes with bombs that follow you around, and they'll charge toward enemies when they see them. Similarly, there's one called "ghoulify," and during a certain timeframe it'll cause every enemy you kill to turn into a ghost that aids you in battle.

There's also a black hole that sucks enemies toward it (great for crowd control), a disco ball that makes enemies within range start dancing, and rubber chickens you can equip to boost your stats. Sometimes they're kind of useless, but often they can provide a big boost to a particular stat - what they do is random, so you'll just have to check and see when you find one! One mojo that's extremely powerful gives you the power of resurrection. If you die while using this mojo, then you'll automatically respawn, which otherwise isn't possible. Its effects only work for a short time, though, so the trick is to activate it just before you think you're going to perish. With many of the mojos, timing is everything, and that's especially true with this one.

Of course, I should also mention the voodoo doll mojos. These are equipable mojos that usually boost your stats, but the fun part about them is that they all have these dark, pessimistic descriptions that were written by our early access supporters on Steam, and they're all named after our supporters as well. 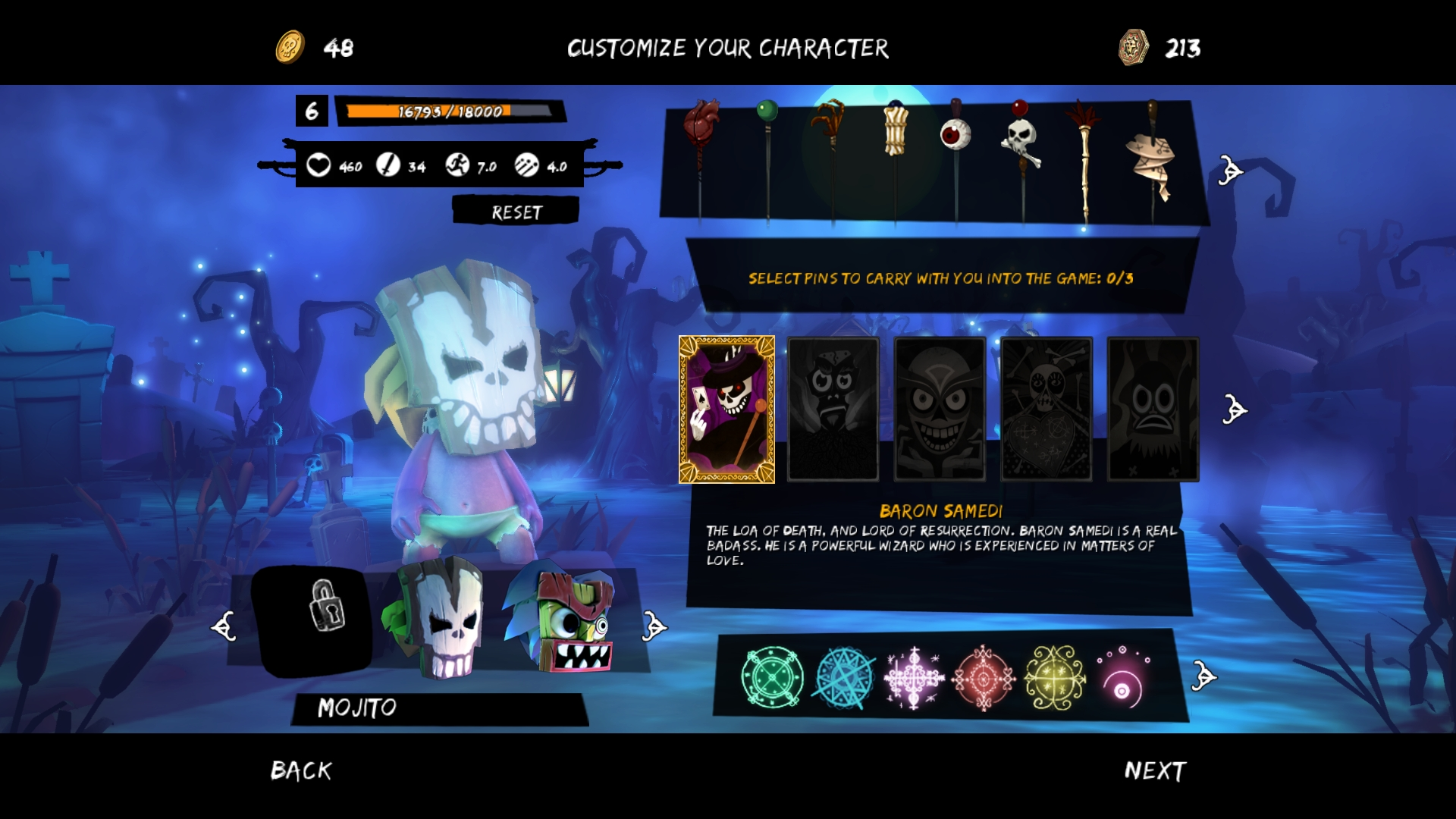 Express your personality by choosing your favorite mask!

There's one other important part of personalizing your character, and that's choosing a mask. The mask is the visually customizable part of your character; unlike the Loa, pins, and mojos, they don't affect your stats or abilities at all. We wanted this to be something that was purely an aesthetic choice so you could go with the one you like best instead of having to worry about which one was strongest.

There are no right or wrong choices, so feel free to test things out and experiment when Full Mojo Rampage hits PS4 and Xbox One on June 28th!