Hey, it's Zach again. If you're going to have an exploration-heavy adventure-RPG like Creepy Castle, one of the things that you obviously want to get right is the level layout: you have to make a game world that's fun and interesting to explore. In our case, though, we didn't want to make things too complicated either. In the end, I'd like to think we found the right balance.

Butterfly can't fly, but she'll have to climb a lot to explore the Creepy Castle. Actually navigating the castle is kept fairly straightforward to begin with: Moth can move left and right, climb ladders (and chains and vines and whatnot), and plummet incredible distances to reach new areas. (Yes, even though he's a moth, he can't fly or even jump.) However, we've filled the castle with lots of branching paths to keep the game fun and involving, and there are plenty of goodies strewn about so you'll want to check out every nook and cranny. Treasure chests contain pickups like keys, attack items, and delicious discarded foodstuffs to replenish your health, and you'll want to go out of your way to find invaluable crosses that provide experience points so you can level up. You'll also find bookshelves all over the castle containing lore that explains story details and fleshes out the game's world and characters. They're not essential and you can skip them if you want, but we hope you'll have as much fun reading them as we did writing them! 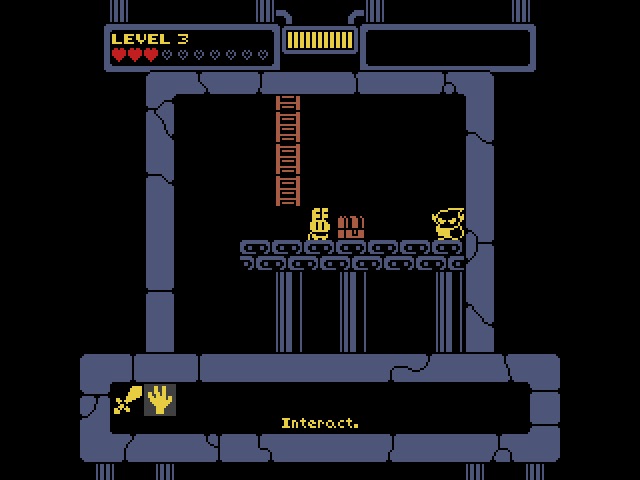 There's lots to discover, both on and off the beaten path. As a nonlinear adventure, the game, naturally, contains lock-and-key puzzles - some of the literal type, the require you to search an area to find the appropriate number of keys before you can move on - and some that require special gear to move forward. Although there aren't too many exploration-assisting items in Scenario 1, there are a few must-have pieces of equipment that you'll need to reach new areas, including the Phaser, which lets you move through certain solid doors, and the Ice Rod, which freezes ice and lava so you can walk across them. (Later scenarios will introduce additional items.)

There are two types of locked doors: standard white ones, and red ones that lead to optional rooms. And, of course, Creepy Castle wouldn't be very creepy without traps and enemies to get in the way, so there are loads of those, too. Since enemies are immobile, they sort of work like obstacles you need to get past, and then there are plentiful traditional hazards, too: collapsing ceilings, retractable spikes that require skillful timing, swinging balls on chains, fireballs that pop out of lava, and a giant boulder that will crush you instantly if it touches you (yes, it's my homage to Indiana Jones).

Honestly, the collapsing ceilings are the least of your troubles around here. Hopefully this will give you an idea of what you'll encounter once you set foot in Creepy Castle - and all this is just in Scenario 1! I hope you look forward to experiencing it for yourself once the game is finished.