Hey everyone! Matt Kap here again. Today I will be touching on something that you will see a lot of in Castle In The Darkness, the monsters!

For a game like this, there really has to be a lot of enemies to make each area feel different, and to keep the challenge ramping up throughout. So, though there are a couple (very few) palette swaps, Castle In The Darkness features over 100 enemy monsters! It would take far too long to write about every one of them, so I have picked a few early-game monsters to share some info about.

Flouse
A flying eyeball with scaly wings and some legs. They aren't hard to defeat, but report what they've seen to the sorcerer that summoned them.

Arrey
An arrey is a skeleton that has been reanimated by evil magic. Because they are missing any heavy flesh or muscle, they move faster than the zombies, and throw bones at the player.

Blue Devil
This mischevious devil spits fireballs at the hero, mocks him, then quickly flies away before he can be punished! 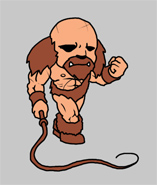 Beastman
The hair coming from this guy's head looks like a strange mullet, but it's really his fuzzy and floppy ears. When he's not attacking you with his whip, he likes to go for walks and play fetch.

Mushman
This creature walks around in Agros Forest. When startled, it will squeeze its fungus muscles and shoot out burning spores through its cap.

This post just happens to scratch the surface of what you can expect in terms of enemies, so maybe at some point I will do another post that will show some of the late-game enemies or more obscure/secret ones.

Last, but certainly not least, the lovely Karrie Shirou made a video of herself LPing the first area of Castle In The Darkness! Keep in mind that this was made a while back, so the build is dated and things will be a bit different when the game drops next week. It was a pleasure for me to watch this, and I'm proud to be the cause of the intense emotional ups-and-downs she had to experience :). Thanks Karrie!

Again, thanks for reading! Please keep checking this blog for future updates! Till next time!