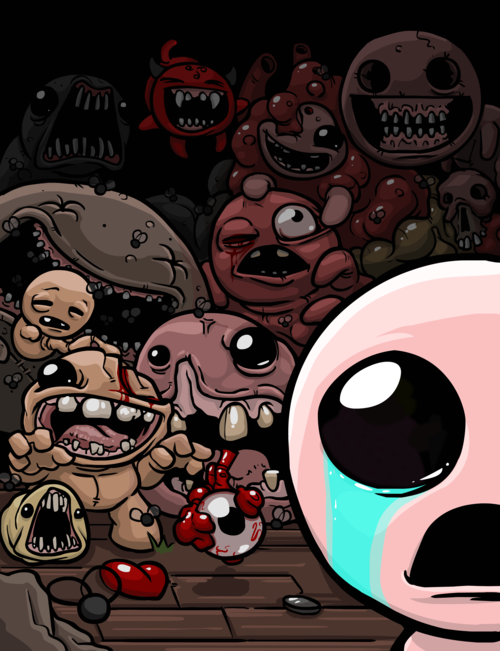 After receiving 80+ questions via formspring and many via email, i have amassed what i believe to be a definitive check list that should clear up most-all confusion on what the binding of isaac remake (Binding of isaac: Rebirth) is/will be.
-Rebirth is a totally remade game based on the flash version of the binding of isaac + wrath of the lamb.

-The game is being produced and developed by Nicalis, the guys who did all the cave story remakes and the VVVVVV port.

-Nicalis is working on the port for Ps3/Vita and PC (steam) and is also currently talking to MS and Nintendo about releasing on their platforms. we are also looking into an iOS version if its not garbage.

-The remake will feature all the content featured in BOI+Wrath but will also feature another Wrath sized expansion over the top that will feature a new final chapter, ending, 2 new playable characters and tons more items, rooms, enemies, bosses and the like. the goal will be to make replaying the whole game not only worth it but also make i so it feels very fresh and new.

-The remake will feature content that was removed from the flash version of the game due to limitations (secret stuff!)

-The remake will feature LOCAL 2 player co-op… no online play because that will just extend the release by another forever.

-The game will feature new music by Danny B as well as some spicy remixes of old tunes.

-I will be lead designer on the project, making sure things are as perfect as we can make them and as true to the original as possible, i will also be designing all the new content and features.

-The game will be getting a full 16bit make over, im doing this because i think the art is tired and im sick of looking at it. i think a fresh coat of paint is needed and i think its kinda appropriate/funny to do a damake for the remake.

-We will try to do a loyalty pre-order discount to anyone who owns the game on pc.

-the remake will run perfect/fast finally!
-we went with nicalis because they were the only dev team im close to and that i trust with my IP.
-the remake will be fully retuned, balanced and improved.

the biggest thing to keep in mind here is that development is just starting with the remake, nothing is totally set in stone and a lot will change over time. Im currently in full time development of Mew-Genics with tommy and we have a few other little tricks in store for you next year so my goal with Rebirth is to simply make sure the remake is top quality and then detail out the expansion and updates once development is much farther along… this remake wont slow down any games im currently working (and thats reason why someone else is doing it!).

more updates will be posted as i get them :)

hope that clears things up.